Etruscan Art and the “Sarcophagus of the Spouses”

“The ancient Etruscans prepared extensively for the afterlife, furnishing their family tombs with richly painted walls, precious and imported objects, and elaborately decorated coffins. They practiced both inhumation and cremation, and produced caskets in various sizes, the most common of which are cinerary urns made of alabaster and terracotta. What makes the Tetnies sarcophagi unique among the few surviving examples of expensive, full-sized, stone sarcophagi are the emotionally moving portrayals of intimacy between the married couples on their lids.

Both couples are featured in loving – and most significantly eternal – embraces. The commemoration of an affectionate marriage for eternity reflects a major difference between ancient Greek and Etruscan societies – namely, the more visible participation of women in Etruscan rituals and public life. Accordingly, Etruscan funerary art is replete with images of married couples. The two Archaic period (c. 575–480 BC) terracotta sarcophagus lids in the Villa Giulia, Rome, and the Louvre – both are known as the ‘Sarcophagus of the Spouses’ – are prime examples; each depicts a couple banqueting together, propped up on their elbows, with the husband’s arm around his wife’s shoulder. Even so, the intimacy of the Tetnies couples, with their tender gazes and nudity, is unprecedented in Etruscan art.”

An Arundel Tomb
by Philip Larken

Side by side, their faces blurred,
The earl and countess lie in stone,
Their proper habits vaguely shown
As jointed armour, stiffened pleat,
And that faint hint of the absurd –
The little dogs under their feet.

Such plainness of the pre-baroque
Hardly involves the eye, until
It meets his left-hand gauntlet, still
Clasped empty in the other; and
One sees, with a sharp tender shock,
His hand withdrawn, holding her hand.

They would not think to lie so long.
Such faithfulness in effigy
Was just a detail friends would see:
A sculptor’s sweet commissioned grace
Thrown off in helping to prolong
The Latin names around the base.

They would no guess how early in
Their supine stationary voyage
The air would change to soundless damage,
Turn the old tenantry away;
How soon succeeding eyes begin
To look, not read. Rigidly they

Persisted, linked, through lengths and breadths
Of time. Snow fell, undated. Light
Each summer thronged the grass. A bright
Litter of birdcalls strewed the same
Bone-littered ground. And up the paths
The endless altered people came,

Washing at their identity.
Now, helpless in the hollow of
An unarmorial age, a trough
Of smoke in slow suspended skeins
Above their scrap of history,
Only an attitude remains:

Time has transfigures them into
Untruth. The stone fidelity
They hardly meant has come to be
Their final blazon, and to prove
Our almost-instinct almost true:
What will survive of us is love. 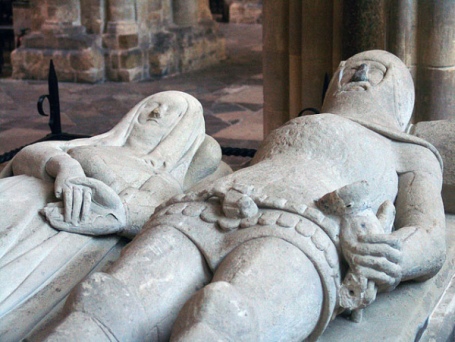 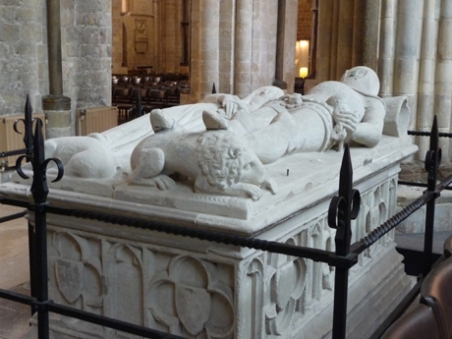